How did my use of technology change during 2015? The short answer is that it increased. For example, I just deposited a check using my phone, and that’s something I never did in previous years.

That phone is a Droid Maxx, made by Motorola for Verizon. My iPhone turned in to a brick earlier this year. From among the phones available from or for Verizon Wireless, the Maxx seemed to me the best deal. This may be due to the particular wireless plan I was already in. The iPhones were by comparison overpriced.

I was happy with my new phone until, after a few months, it went into spiral of frantic uselessness, in which it would do nothing but restart until it ran out of power. Staff at the Verizon store agreed that it should be replaced, and replaced it was.

My second Maxx is behaving well so far. I like multiple things about it, especially the size of the screen. I’m not missing my iPhone. But I haven’t abandoned Apple: the two iPads in the house are in frequent use by the kids and by me. END_OF_DOCUMENT_TOKEN_TO_BE_REPLACED

“WordPress is web software you can use to create a beautiful website or blog”: this according to WordPress.org, a site that surely ought to know. WordPress was originally for blogs. Then it was for blogs and, if you wanted, other websites. Now it is for websites, including, but certainly not limited to, blogs.

When WordPress 3.0 came out, back in 2010, I realized that a Learning Management System (LMS) could be built on the WordPress platform. I thought about building one myself, but decided against it: the LMS market was crowded; it contained a huge competitor in the form of Blackboard; I didn’t see how I could get a first foothold in the market; and so on.

2014 saw the release, not only of WordPress 4.0, but also of CoursePress: a WordPress-based LMS from Edublogs. While it didn’t make sense for me to build a WPLMS in 2010, it makes a lot of sense for Edublogs to do so now. The LMS market is still crowded, but Blackboard is less dominant. More important, Edublogs already has a foothold in many educational organizations: those for which it manages blogs.

So how is CoursePress implemented? In WordPress terms, it is a plugin. You can download it at no charge. So what is it in business terms, and how does it make money for Edublogs? There are two answers: it is a feature of the CampusPress service; and it has a Pro version, for which there is a charge.

I consider CoursePress interesting, and in with a chance. How about you?

I just gave in to the temptation to start a new blog, having resisted said temptation for… months? years?

I teach at Virginia Tech. Like many universities, it hosts WordPress blogs for those to whom it provides an email address.

So I started a new blog there. Well, there isn’t physically at Virginia Tech: Blogs @VT is run by Pressable.

This will continue to be my main blog, and my personal home on the web.

Spring has come to Changing Way, with new content blooming. But weeds, the form of spam comments, are also appearing, and Akismet isn’t a completely effective weedkiller. I’ll help it, by manually marking the comments in question as spam.

I hope that the change of seasons is going well for you. 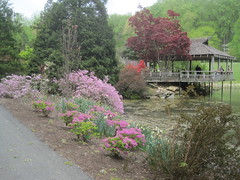 I took the photo about a year ago, at Brookside Gardens.

Happy 10th birthday, WordPress! And same to you, ReadWrite! Here are a couple of “open letters” celebrating WordPress’s 10th: fanmail on RW; and a love letter from Matt Mullenweg to his baby, now all grown up.

10 years ago (according to my memory, and the rather more reliable Wikipedia):

Since then, WordPress has grown in ways too numerous to mention here and RW has long been a media property or suchlike. I am now in in the DC area, and have two kids, one of whom is nearly as old as WP and RWW.

Here’s to further good decades for WP, RW, me – and you, dear reader(s).

Those two upgrades came up fore renewal a few days ago. I renewed domain mapping, but not custom CSS. The main reason I didn’t renew custom CSS is that it no longer exists. It is part of the custom design upgrade, which also includes custom fonts, and is twice the price that custom CSS used to be.

I regret the passing of custom CSS, but there are a couple of reasons why the regret isn’t strong. One is that I understand that Automattic, the people behind WordPress.com, seem to be moving toward a simpler and more profitable menu of upgrades. The other is that my custom CSS is still in effect as of now. Perhaps it’ll stay in place as long as I don’t try to make further CSS changes. If so, I’m not sure whether that is by accident or design. Either way, I’ll take it for as long as it lasts, but may seek another (clean) theme if it goes away.

I wish the term content management system (CMS) would go away. I make that wish after reading a post by David Strom at ReadWriteWeb about what’s wrong with today’s CMSs.

As usual when CMSs are the subject, the conversation quickly get strange. One of David’s problems with is that some CMSs are (or started as) blogging platforms, and so suffer from excessive ease of use: “today’s blogging platforms make it so easy to post new content to a website that almost anyone can do it.”

In comments, Scott Fulton (another RWWer) declares that the term CMS results in a score of 0 for 3. That’s the precise opposite of my problem with the term. It seems to me that almost everything qualifies as a CMS. It allows for content? Check. Some sort of management is possible? Check. It’s a system? Check, in that it’s a system of components forming a whole? Again, almost anything can get a check for that. That renders a score of 3 for 3 so common as to make the score, and the term CMS, almost meaningless.

The most interesting (to me) passage in David’s post is:

Each time I transition to a new CMS, (as we are about to do here at RWW), hope springs eternal that I will find the one true system. And then, these hopes are quickly dashed.

So I’ll be looking out for answers to the following questions:

Is it possible to run multiple WordPress websites with just one install of the WordPress software? The answer is yes. It has been yes since the release of WordPress 3.0. Prior to that, it was a qualified yes.

Prior to the release of 3.0, you could use WPMU (WordPress Multi-User) to run multiple sites on a single install. The folding of WPMU into WordPress core was, in my opinion, the main reason that the release deserved to be 3.0, rather than 2.WhateverWouldHaveBeenNext.

When WPMU was newish, and newly appointed as the official method of multi-site WordPress, I ran a blog about WPMU: How Do You MU? I kept track of WPMU installations.

I also did a survey of WPMU administrators. That was 5 years ago, so it’s ancient history. But ancient history can be interesting, so you might want to check out the posts including the results of the survey.

It would be interesting to see a survey of multisite networks on WordPress. I’ll do one if given sufficient encouragement…

This post is part of an occasional effort to consolidate my blogging efforts. Almost everything new will be here at Changing Way.

WordPress.com has long provided a Custom CSS upgrade. I’ve been using Custom CSS here at ChangingWay.org ever since the blog has lived at WordPress.com and used the Simpla theme.

But the main difference between Custom Design and Custom CSS is: Custom Fonts. In fact:

Custom Fonts refers to the use of Typekit. CSS and Typekit go logically together, as I noted when I first tried Typekit. That was two years ago, before Typekit became available at WordPress.com. It would have made sense to me had Typekit been available as part of Custom CSS. After all, CSS allows you to specify fonts (among many other things), while Typekit lengthens the list of fonts you can use.

Instead, when WordPress.com first made Typekit available, it opened the Typekit door to all users, at no charge, while providing minimal support. I played around with Typekit at this blog, used it elsewhere, and responded to some questions about Typekit in the WordPress.com forums. But ChangingWay.org currently uses CSS, rather than Typekit, to specify fonts.

WordPress.com announced the Custom Design upgrade earlier this year. To recap, this means that for $30 per blog per year, you can get the combination of Custom CSS and Custom Fonts, with support for both. The combination is a logical one and, at less than $1 a week, seems reasonably priced – to WordPress.com, and probably to many of its bloggers.

But, to other WordPress.com bloggers, the bundling of CSS and Fonts into a single $30 package represents an unwelcome change. One blogger recently complained in the forums that he cannot use Typekit for free anymore (but follow the link to the thread for a way in which bloggers already using Typekit can continue to use it at no charge).

To me, Custom Design represents a doubling of the price I pay for using Custom CSS at this blog. I don’t need Typekit, and I don’t need CSS support. The price change is an input into my annual question: should I continue to pay for WordPress.com upgrades, or should I move to another WordPress host?

What are your thoughts on the Custom Design upgrade and its pricing?

Making Money From Your WordPress.com Blog is one of the most-visited posts on this WordPress.com blog. “Can I run ads?” is one of the questions most often asked on the WordPress.com forums. The short answer to that question has always been “No.” The longer answer involved an exception for certain high-traffic VIP blogs.

We’ve resisted advertising so far because most of it we had seen wasn’t terribly tasteful, and it seemed like Google’s AdSense was the state-of-the-art, which was sad. You pour a lot of time and effort into your blog and you deserve better than AdSense.

I find this curious, because WordPress.com has for years run AdSense on blogs it hosts. The quote seems like acknowledgement of a criticism I’ve often seemed leveled at WordPress.com: that it makes money by marring its bloggers’ content with ads that aren’t, well, terribly tasteful.” It also seems like an unnecessary swipe at Google.

The advent of WordAds raises several questions. Update, two days later: Jon Burke of Automattic/WordPress.com was kind enough to answer my questions via email; hence the italics following each question. See also Matt’s reply to my comment on the announcement post.

I am fairly confident that the answer to the plugin question (#3) will be “yes,” and rather less sure about answers to the other questions. (Turns out I was wrong, certainly about timing, and possibly about the plugin itself.) If you have answers, guesses, further questions, or other remarks about WordAds, please leave a comment.