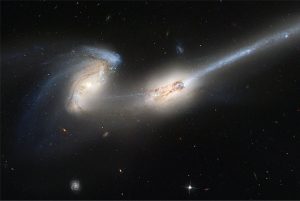 In The Long Tail (Revised and Updated Edition), Chris Anderson uses astronomy as his lead-off example of “new producers.” Amateur astronomers complement the work of professionals by, among other things, observing the heavens: there’s a lot of heaven to observe. Much of the observation is due to the long tail comprising these amateurs.

That wasn’t the only example of a long tail of production in science that I encountered today. Amateurs are trying genetic engineering at home, reports Yahoo News. The article doesn’t mention whether these amateurs are producing life forms with long tails. I found the article via Reddit, where it has prompted some interesting comments.

I also found the image via Reddit. These two mighty galaxies are pulling each other apart. Known as ” The Mice” because they have such long tails, each spiral galaxy has likely already passed through the other.